Severe channeling and only 38% stand-off was found when using 1 traditional bowstring centralizer for every 4 joints. By running through a series of different cases in iCem Ted Groff, Sr. Account representative at Halliburton for cementing in the Rockies, identified that the centralizer program was inadequate.

Halliburton recommended that Conoco Phillips use 1 Centek S2 centralizer per joint through the curve and 1 every other joint in the vertical.

Centralization was optimized for mud removal through critical zones and centralizers are run according to engineered design. The added cost of centralizers was offset by reduced drag which went from 40,000lb to 22,000lb.

Centralization Comparison plots the before and after CBLs next to each other. The CBL showed no channeling using Centek centralizers.

"The pickup and slackoff (PU/SO) weights were very low in the vertical part above the curve, running from 5k to 10k lbs. At times it was negligible to the point of it not being possible to see a distinct PU/SO weight from string weight." 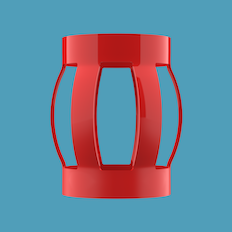