The typical spread cost of a land rig is around $35,000 - $40,000 per day. For wells that hit trouble, the average time lost per well is probably around 2 - 3 days, which would give approximate downtime costs for the well in excess of $70,000. Not major but an added expense. Stuck casing strings are one of the major contributors to rig downtime.

Sometimes casing doesn’t make it to total depth on the first run. Today's complex well designs and demanding well conditions can require special measures when running casing. People rarely consider that in the event of a rerun being necessary, the casing centralizers may have to make three trips; trip in, pull out, and run back into the well bore. After the trip out, if standard welded bow spring centralizers have been used they may well not be intact or in any condition to be rerun. This can mean a lengthy delay whilst new centralizers are sourced. Centek Centralizers, however, with their unique non-welded, slip-on design offer high performance with the reliability and rigidity to survive these extended casing trips and harsh well environments and have proved on many occasions that they can be re-run.

One of Centek’s South American customers, in Ecuador’s Yuralpa field, encountered problems running casing, but was able to successfully rerun the same Centek centralizers on the second trip down hole. During the first liner run, well conditions (unrelated to the centralizers) prevented the casing making it past 7,803ft in the wellbore. While the liner could be circulated, rotated, and reciprocated, no further deeper movement was possible so the liner had to be pulled out of hole.

The 95/8in liner was rerun and reached TD without any problems. The centralizers had been run through 25,456ft on a 9,850ft wellbore design and had gone through an exit window twice. The cementing job on the liner was performed precisely as per design. The customer was happy with the results and is now planning to use Centek centralizers in future wells.

In Norway, Det Norske lost 24 casing joints down hole with the string falling over 800ft. When the string was pulled only one centralizer was damaged. The rest were used again to successfully get the string to bottom avoiding the delays associated with ordering more centralizers. 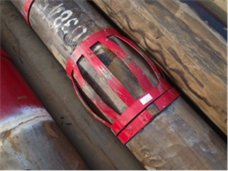 In another well in the Norwegian Starfish field the liner was pulled due to down-hole conditions 40m short of TD. Even after more than 12 hours of rotation down hole in the cased and open hole, the UROS centralizers, upon inspection, were found to be undamaged, apart from the bending of some of the set screw sockets and were re-run with no issue. 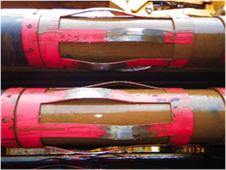 Centek UROS centralizers undamaged when liner was pulled after 12 hours rotation down hole in the Starfish field.

During a completion in Egypt, repeat liner fails for Petro Amir meant that Centek centralizers had to be pulled out of hole several times due to obstructions and failure of the releasing tool. Each time, after close inspection, the centralizers were rerun and suffered no damage. The customer calculated that use of this type of centralizer saved the well nearly $20,000 and 18 hours rig time. 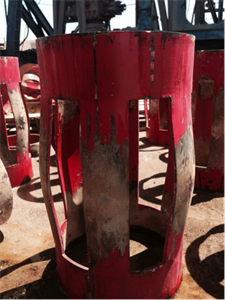 Undamaged S2 centralizer after being repeatedly pulled out of hole in Egypt.

The single piece construction of the Centek S2 gives it robustness and strength which exceeds that of many competitors’ products. Although Centek does not recommend the reuse of centralizers when pulled, these examples shows that even when subjected to extreme stresses, the unique design of Centek centralizers means that they remained in good condition and could be rerun.

Spiralling costs mean downtime is becoming prohibitively expensive. In addition with many wells operating on thin margins since the oil price fall, a single broken centralizer requiring removal could jeopardize the financial viability of a well making it even more crucial to use the toughest centralizers from the outset. Centralizers in real terms are cheap, but if they fail or are damaged then they assume a consequential cost out of all proportion to their price.  Centralizer failure costs a fortune. Don’t risk it!