Repeat liner fails meant that centralizers had to be POOH (pulled out of hole) several times due to obstructions and failure of releasing tool and were subjected to a 4,000ft drop down hole after sudden loss of the weight of liner (40klb) on first POOH.

The use of Centek S2 centralizers meant that each time the liner was re-run the centralizers were in good condition. There was no damage from falling off the liner and several RIH and POOH, plus a fishing operation. 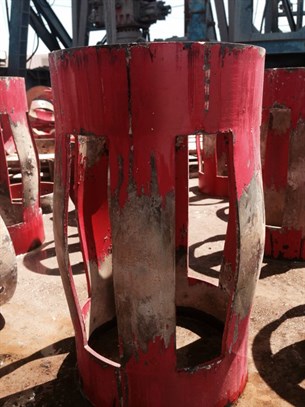 Customer calculated that use of Centek S2 centralizers meant a cost saving of $19,708.00. Minimum rig time was required during fishing and cleanout of hole because of no centralizer junks. This saved 18 hours rig time.

This is compared to the use of normal bow spring centralizers which, the customer felt, would have been more likely to have had to be replaced as they could not have remained intact and could have broken in hole. This may have even led to the loss of the production section of the well.

The Centek S2 single piece construction gives it robustness and strength which exceeds that of many competitor products. Although Centek does not recommend the re-use of centralizers when POOH this case study proves that even when subjected to extreme stresses the unique design of Centek centralizers meant that they remained in good condition and could be used repeatedly.